Home » Blog » TLP Spotlight: He refuses to Wear Jeans, but His Art is Great

A family guy, an artist, Trueline’s art director, and a guy with a hard-to-pronounce last name, Neill Ewing-Wegmann is many things.

He even claims to be Batman, a point he will make—with your permission—by pulling down the collar of his probably-colorful T-shirt to reveal a Batman v. Joker scene extensively tattooed on his chest. 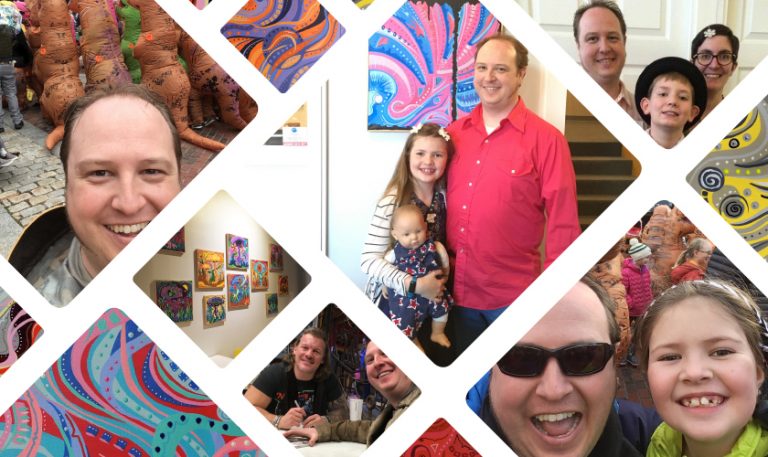 But for simplicity’s sake, think of Neill as a guy who knows his priorities.

Somehow they come together with his hands-on role at Trueline, he reflects late one morning while taking a breather from the email communication that consumes much of his workday and involves extensive—and largely unseen—customer service with advertisers needing design services.

Art has always been at the center of his life, he reflects beneath his office mantel of comic books, action figures and a giant Pez dispenser shaped like Darth Vader’s mask.

Running a department of two, plus freelancers, and overseeing all design, he can do his paintings in the mornings and nights due to the predictable 9 to 5 schedule. Then there’s the reality that graphic design, for which he received a BFA from Colby-Sawyer College, is more in alignment with his art than the odd jobs done by some of his artist friends.

Not that there’s anything necessarily day-to-day about his paintings, which have sold throughout the country and world, and appear in galleries and art shows.

For years, Neill was obsessed with the old mills in industrial Westbrook, Maine. His early paintings, lit with color, are abstract depictions of these mills—industrial-esque landscapes that were influenced by comics and pro wrestling. Over the years, as Neill’s tastes have shifted, the mills have tended to dwindle into the literal background of these painting, and more recently have vanished altogether.

Today, most of Neill’s work is “non-representational.” You can see what that means by perusing his portfolio.

Or you could ask his precocious daughter, Penelope, age 8, who lately has been working on a book called “Locked” about social cliques in her school. She—as well as Neill’s son, Shanon, and wife, Kate—are another facet of his life unseen to coworkers.

So, does he have any secrets to balancing these many interests and responsibilities?

“I don’t wear jeans,” he advises. “I don’t really find them that comfortable.” Batman can’t be fighting wedgies on top of everything else.

Second career choice: There is only art

What his close friend says about him: “His voice resonates through walls.”