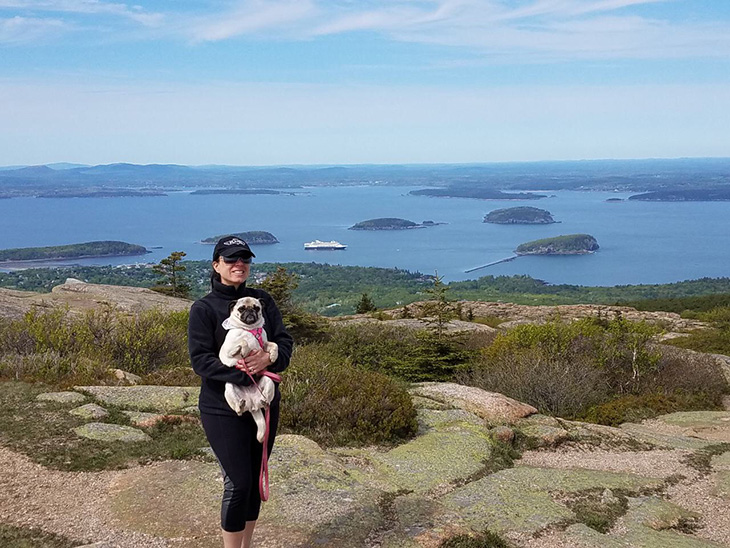 Leaving her home to study English in a faraway country. Moving with her future husband to New York after only a year of dating. Heading east to New Hampshire a few years later, despite having only visited the state once.

If there’s one thing Diana Carrillo isn’t afraid of, it’s taking chances—whether on life, love or a menu item with obscure ingredients.

“The first time I came to the U.S., it was a little scary, being in a different country, a different culture,” says Carrillo, who recently marked her second year as an editorial director at Trueline. “But I’ve grown so much because of these experiences. I wouldn’t trade them for anything.”

Born and raised in Bogota, Colombia, at a time when the country was undergoing a seismic political shift, Carrillo was 23 when she took her first major leap: moving to Greenville, South Carolina, to live with her aunt and study English at a nearby community college.

In 2005, Carrillo moved back to Colombia to complete her degree in international studies at Bogota’s Universidad del Rosario. It was there, during her final year, that she met Michael Rodriguez, the man who would become her hemisphere-hopping partner—and husband.

“Michael is half-Colombian, so he used to go to Colombia every summer to visit his family,” Carrillo says. “His father and my father are members of the same social club, and that’s where we met.”

Within a year, Carrillo took the plunge again, moving from her native city to live with Mike in Cortlandt Manor, New York. In addition to studying English at the local community college, Carrillo spent many a spare hour painting and making crafts—hobbies she still pursues today.

The two were married in 2008. Then they moved back to Colombia. Again.

Diana, Mike and Ginger on their way to the US!

“We stayed there for almost eight years,” Carrillo recalls. “But I think we always knew we’d move back to the U.S.”

In 2016, they came back for good. Following a brief stay in Miami, the couple moved to Rochester, New Hampshire, in the fall of 2017.

When Carrillo was hired at Trueline, the Latin American editions of Vanguard and Vision were still in their infancy. Her bilingualism—coupled with a knack for connecting with clients personally—quickly set her apart.

“It’s really amazing to hear about how these companies are helping change the world and make it a better place,” Carrillo says. “That’s what I enjoy most, hearing those stories.”

While she and Mike have since moved to Massachusetts, Carrillo continues to be an indispensable piece of Trueline’s LATAM team.

When she’s not dialing to area codes across the Western Hemisphere, Carrillo enjoys hiking with her husband (and 12-year-old pug Ginger), discovering new restaurants and—of course—making her annual trip back to Colombia.

“Most people don’t know how big Bogota actually is. It’s a cosmopolitan city,” Carrillo says. “The food, the culture, the art—it’s all world class. You can find everything. But even if you’ve lived there, there’s always something new to discover.”

Go-to chill spot: On the beach

The greatest gift she’s ever received: Her siblings